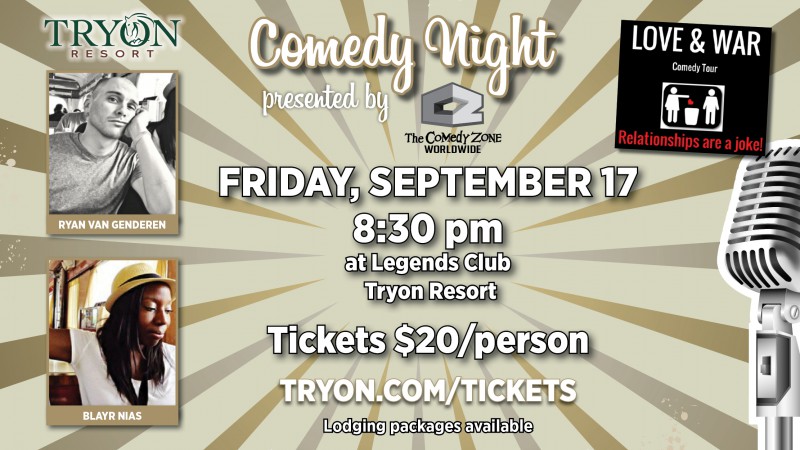 Comedy Night presented by Comedy Zone is back by popular demand!

Tickets: $20/person, available ONLINE ONLY HERE. Expected to sell out.

Dining: Bar and limited menu service available. Attendees are encouraged to arrive prior to 7:00pm for dinner in any Tryon Resort restaurant.

Local favorites, and off and on again comedic couple Blayr Nias and Ryan Van Genderen take the stage together in this exciting evening where they walk the thin line between love and hate.  The gloves come off as this hilarious duo proves that love really is a battlefield; both comics taking aim at each other before the audience gets to shoot questions at them closing the show with a no holds barred interactive Q&A.  You could find out who’s family is crazier, who almost got arrested, who’s worse in bed…

Blayr Nias, seen on Fox Laughs and Funny or Die’s Oddball Comedy Festival is a contributer on WCCB’s News Rising for Couch Chat as well as the producer of the Almost Famous Comedy Show.  She has opened for comedic heavyweights like Gilbert Gottfried, Marc Maron and Katt Williams.

Ryan Van Genderen, seen on Comedy Central’s Up Next and Jeff Foxworthy and Larry the Cable Guy’s Backyard Barbecue performs all over the country from colleges to casinos. He has worked with comedy legends such as Aziz Ansari, Margaret Cho, Bill Burr, and the late great Ralphie May.

You won’t regret pulling back the curtain on this crazy comedy carnival.  No one loves to hate each other more than these two.  The jokes and jabs will have you begging for more.   Just remember…”All’s fair in LOVE and WAR”