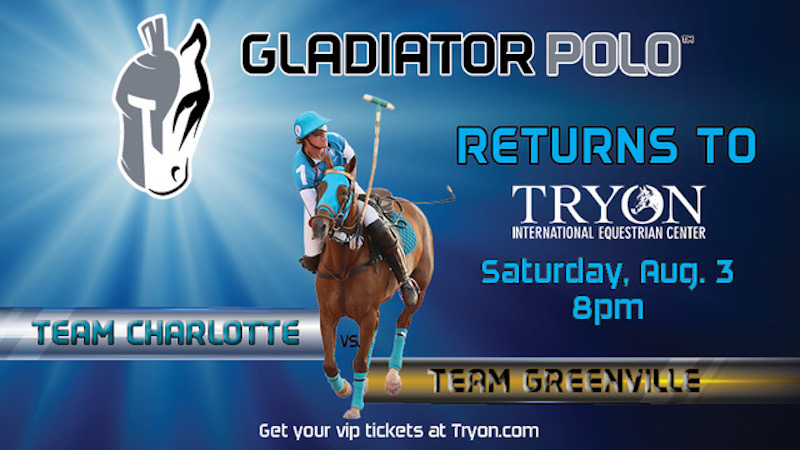 Gladiator Polo™ returns to TIEC for a thrilling rematch between Team Charlotte and Team Greenville on Saturday, August 3, at 8pm at Tryon Resort, featuring the world’s best arena polo players and bringing the action-packed fan-favorite event back to the venue. Brand new for 2019, a Ninja Polo™ Camp, proudly supported by Polo Training Foundation, will be offered August 1-4 to kids ages 11-18 with instruction provided by Team Charlotte and Team Greenville competitors and featuring a Ninja Polo™ showcase Saturday night in Tryon Stadium prior to the Gladiator Polo™ match. Fans can expect an epic battle between the two teams as Team Greenville in black defends their title as “Battle for the Carolinas” champion against a motivated Team Charlotte in teal following their loss in the 2018 championship match at TIEC in June. Grab your black or teal gear, bring your family and friends, and join us Saturday, August 3rd!

Fans will be thrilled to see the return of notable players like Jared Sheldon, 2018 winner of the “Battle for the Carolinas” series at TIEC as well as the US Arena Open, and Patrick Uretz, who holds the Battle for the Carolinas title from 2017 and was a two-time National Intercollegiate Champion. New to the TIEC Gladiator Polo™ stage, key players to watch include Mike Azzaro, former 10 goal player and winner of the US Open, Team USPA member Felipe Viana, winner of the US Arena Open, and Matt Cappola, who was a finalist in two of three GAUNTLET OF POLO™ Finals at International Polo Club at Palm Beach (IPC) in the recent 2018-2019 season.

General Admission and parking for Gladiator Polo™ are free. The stage will be set Saturday evening with free activities for the whole family beginning at 6pm, with kids’ activities, face painting and pony rides, entertainers and magicians, concessions stands and onsite restaurants available. An authentic Argentine Asado buffet will be highlighted in the Legends Club and Sky Deck, offering premium seating ringside for an elevated competition dining experience along with a beer festival with unlimited four-ounce flights featuring numerous local breweries. All-inclusive Asado and beer festival tickets are available here. Following the match, don’t miss out on the karaoke after-party at the Silo Bar!

Click here to learn more about the return of Gladiator Polo™ to TIEC!