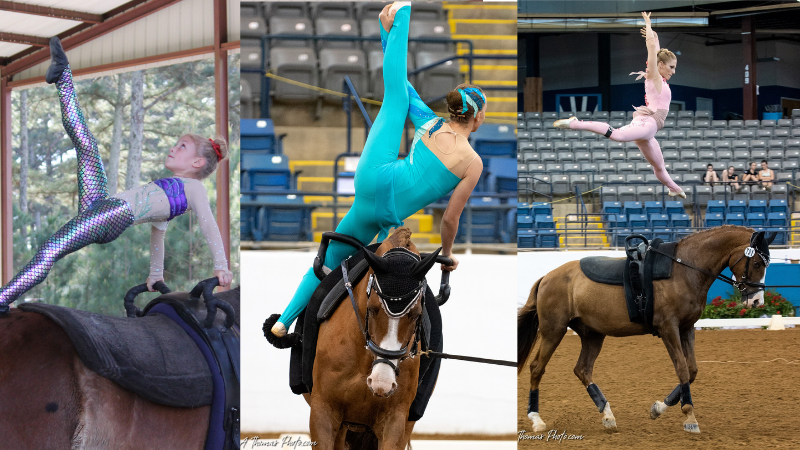 Join us at 7pm in Ring 1 on Saturday, July 20 for a demonstration by the incredible Shea Rose Vaulters  and Reverie Vaulters out of Charlotte, NC! Here’s your chance to experience the athletic artistry of the sport of Vaulting, free and open to the public ahead of the $134,000 Horseware Ireland Grand Prix CSI 3* at 8pm in Tryon Stadium.

About Vaulting: Equestrian vaulting, thought of as gymnastics or dance on horseback, traces its roots back to the ancient Roman games.  During the Renaissance era, vaulting received its present name in Europe, “Volitige”, where it was employed as a form of riding drills and agility exercises for members of the calvary.

As a modern sport, vaulting teams often work together and demonstrate a tight knit sportsmanship that extends beyond both team and individual. For Saturday Night Lights, Shea Rose Vaulters and Reverie Vaulters will perform together to show you the many different levels of vaulting.

The Shea Rose Vaulters are the oldest team in the Carolinas, and feature vaulters of all levels, beginning at 6 years of age.  Vaulters work together across and age and skill levels to create a beautiful and dynamic performance. Vaulting horses often take years to train, and require a bond between both longer and vaulter. Every level of vaulting horse and vaulter will be represented on this amazing night, from the very greenest members of our team to the most seasoned Gold level.

Come learn about what it takes to be a vaulter and see talented performers of all ages demonstrate their skills!